The North Island was quite repetitive. Road to forest to more road was the sequence almost every day I encountered. That was until the Tararua Range, where I got the first real tasting of the South Island.
Walking finally above the forests and all the mud, where there were views. Actual views highlighting this amazing country. Before that there were only tidbits being shown. So from now on I will be updating my blog on a steady basis because this is the real reason anyone hikes the 'Te Araroa Trail'; the South Island, hiking along the Southern Alps!!
Posted by Unknown at 14:40 No comments:

Took a rest day yesterday to catch up on the newly released blockbuster: James Bond Spectre. I also watched a hilarious Christmas comedy movie 'The Night Before'. It was quite different being in a 'big' city such as Hamilton. After finding out I had lost both my knives....I went to MacPac and bought a standard Swiss Army knife.
Now again to clarify, I don't wantto road walk when I can easily avoid it by taking say a vehicle with four wheels, or a bus. There is a 15km walk to Whakawhaka which is pronounced fakafaka. When I bought a bus ticket I said Whakawhaka when I clearly knew it was wrong but I didn't want the teller to go "what'd you call me!!"
While waiting for the bus I had made a bounce box with things that were in my bag that I didn't need. I lost about 5lbs, including camera (I've taken 3 photos), thermal bottoms an tops( cause it's summer), a t shirt, and some body and foot creams I don't really need now that my feet are say 'acclimatized' to walking 30km a day. Sent it for 6$ to Taumarunui.
Took a normal city bus 12minutes to Whakawhaka, found the only shop there, bought a nice cream bar and was on my way to the base of Pirongia.
10km in a high school van pulled beside us and offered a lift tithe base, but since cheating already today we denied. The road walk wasn't too bad, there was barely any traffic so progress was good.
As the ominous mountain/volcano thing came nearer and nearer into view I kept wondering how bloody muddy this jungle is going to be. Every jungle has been just brutal, this one will be better tho because there is a 16person hut at the top. Either dinner or lunch will be dry..temporarily.
At the end of the road there was a 2km walk to another campsite area at the very base of the mountain. Set up camp and had dinner on a bench! Heck yeah.
Side note I have had feet problems and I was assuming it was sand under my shoe souls. Therefore I sliced at the base of the shoe soul and found about a 1/4 cup of sand per shoe. Now why in the hell would a shoe have an inner liner where the only way to get particulates out I it was to destroy the shoe??? Anyways, tomorrow I my feet will be ok 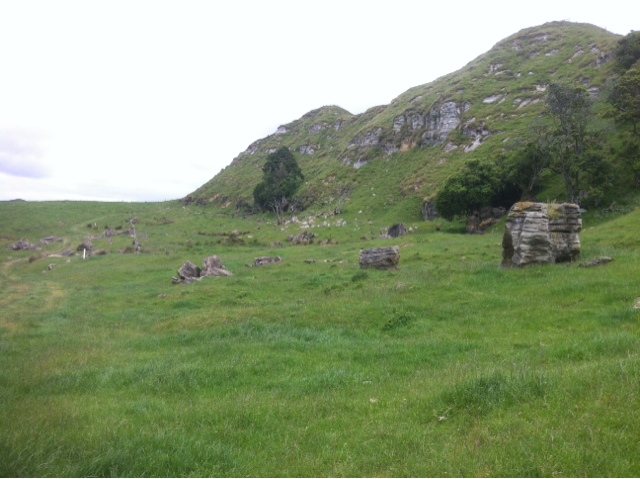 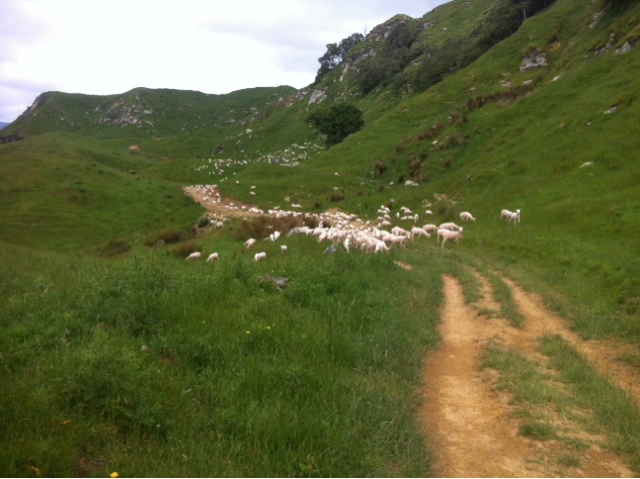 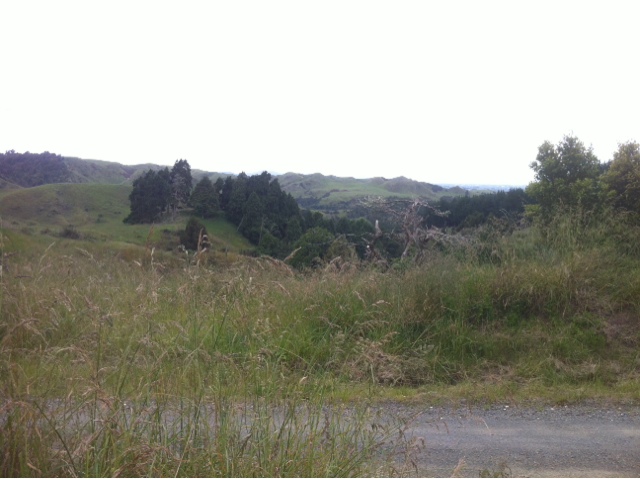 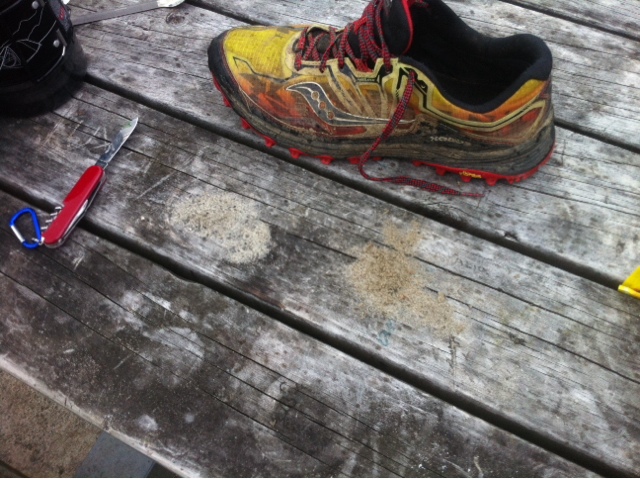 Coromandel was nice, very secluded and had stunning views. But back to hiking now. It's a 25k to Clevedon. I got my stitches out today in Manakau medical clinic which was a nice relief. I thought my hand would have been healed more than what it was but it's still parted and not together. Whatever I'll jut have to take good care of it keeping it clean. I'm not using my right pole so the walkin feels different. Can't get into much of a rhythm walking like before.
Walking to Clevedon was mostly road walking with a 5 km detour through a pine forest. It passed right before a quarry and went straight up.
I stopped in Clevedon after making the decision I would much rather sleep in a motel then a tent. Tough choice.
Tomorrow is the start of the Hunua Range. Weather looks perfect so it should be a good time. 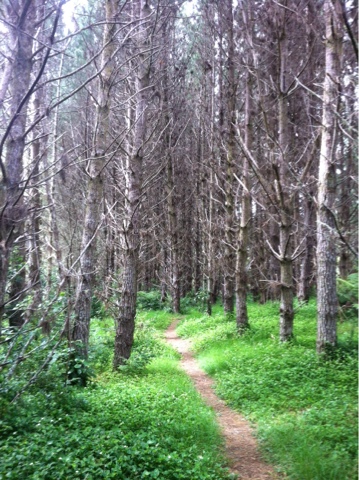 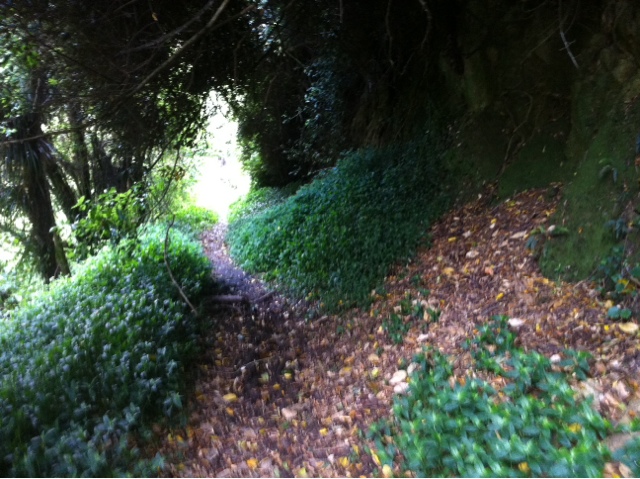 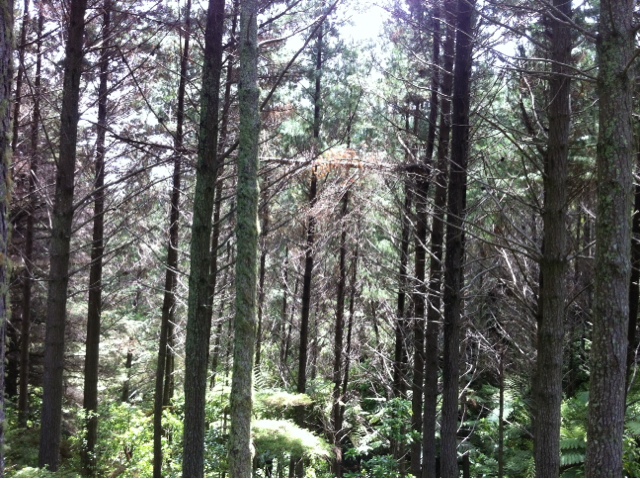 Overnight I had a thinking to take a few days off to rest the hand and also see the Coromandel Peninsula. Everyone I've met said that it is the place to see in the North Island. Richard wasn't ok with taking a few days off so he continued on, not even taking a rest day in Auckland..crazy. Almost everyone stops in Auckland for a night.
I booked a ferry at 6pm which takes 2 hours to get to Coromandel Town.
It was a 3 hour walk to Davenport which was actually quite a nice walk. It may have because it was the last road walk for a couple of days or it may have been the scenery, but today was nice.
Anyways off to Coromandel town to do some day hikes? More hikes, yeah oh well why not! 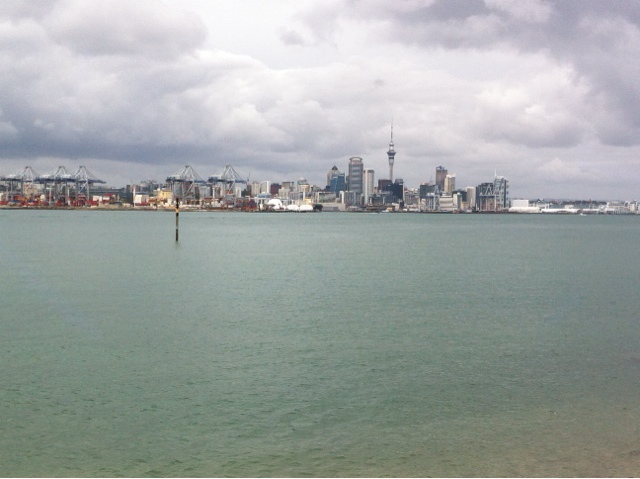 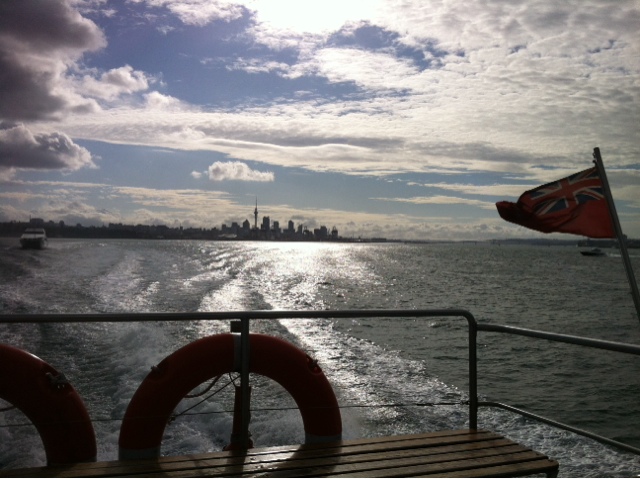 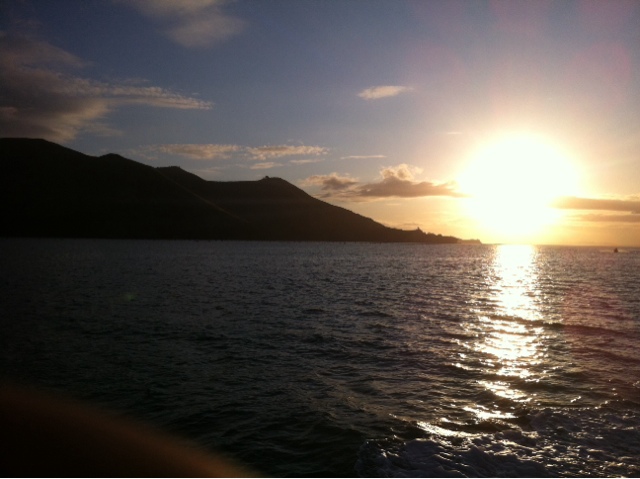 I had to make a re route today to avoid the Okura estuary. If the tide was high and I had to raise my pack over my head to wade through I couldn't because my right hand was immobilized. Therefore I had a 25k plus road walk into Takapuna back to the trail. Road walking was terrible, but we made good time and got to the Takapuna holiday park by 4. Takapuna is a suburb of Auckland so there were shops and bars everywhere. It was the first real sense of being in a city since I started the trek.
Had some overpriced fish an chips at a cafe just outside te holiday park then packed it in. Auckland tomorrow. With a stop in davenport to catch a ferry across the harbour. 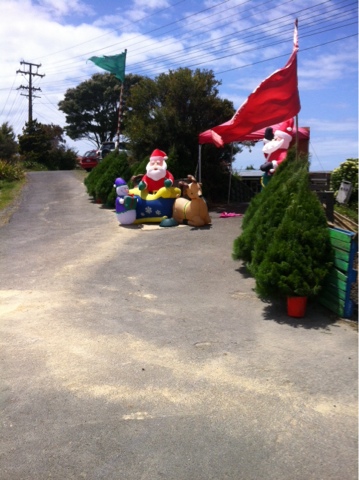 I'm in a car looking at the road I would have been walking if I was a "purist", pfft suckers. We even passed a hiker, but the car was full we 3 of us already an packs. I had met a chap named mark from Austrailia who is walking from Bay of Islands to Auckland. Now he's not a thru hiking, he walks the same path but he never camps. His bag is at an enviable 8lbs which consists of shoes, water, and rain gear. He books all his stays before he sets out, mainly in B&Bs. That is fantastic, I wish I had an 8 lbs pack. He is retired now but he does 2 big hikes each year all over the world.
Hilton dropped us all off and off he went. Put my tunes in, found some funky music and was on my way. There were two rivers we had to cross, sorry creeks. First one I just skipped across rocks, then second one I had to take off my shoes to get across. Then just roads after that, not much to say about road walking. There are turns and then just more turns.
Posted by Unknown at 10:13 No comments:

I haven't touched this blog in a while so I don't really remember this day. Normally I can just look at my maps and I will remember everything. But sadly I lost that one map for this stage.
I remember from about noon onwards. The mornings are all quite boring anyways. Wake up pack up your things and mindlessly walk about in a forest, jungle or road.
Matapouri bush track was very nice and nearer the end of it, the trail passes by Tane Moana (big ass kauri tree). From what I've gathered is that it's the only one in the area. Also it is one of the biggest Kauri trees. DOC had to make a boardwalk around it because it was just so massive.
It was a nice walk down into Ngunguru. While waiting for Richard I sat on a grassy spot next to a roundabout and just chilled out. Once he was caught up we went to a restaurant/cafe and had a big meal of fish and chips. While eating there was a woman who mentioned she hiked the TA so we chatted. She mainly did the South Island parts so it made me very envious. The north island is just there...you have to do it to walk the Te Araroa. The South Island is the most stunning backpacking paradise in the world. Anyways.
It was a 6 or so km road walk to the Riverbank Homestay. The lady running it let us sleep in the garage because the forecast suggested rain, which was nice. Although I've never slept in a garage. Writing this now I would have rather slept in my tent. But the added bonus was that in the morning her husband would drive us 13km down the crappy road walking part. It was an obvious decision. Now. There are these "purist" hikers, they think you have to walk the entire length of it to say you competed it. Nah. Just nah. Road walking is terrible, especially on a 100km stretch. A nice gravel road in the country or a secluded desolate road is all good. But when there is a probable chance of getting hit by a maniac behind the wheel is present, I will accept a hitch always. At the end I can say I did 95% of it in my head, then of course just round up to 100% when I tell others.
We were invited for crumble after their dinner which was good and then off to bed. Tomorrow is the Mackerel forest track. 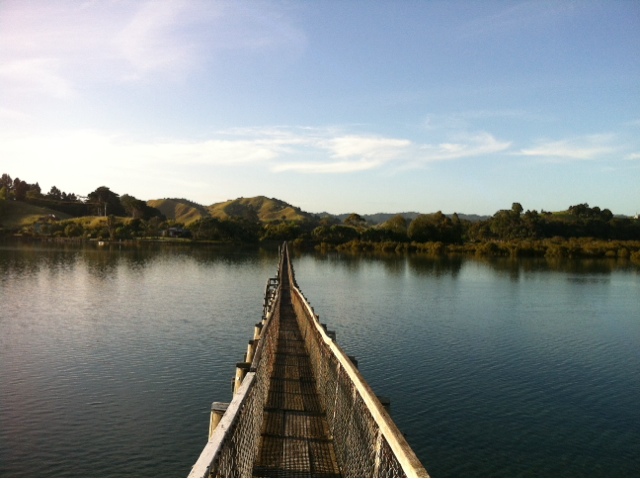 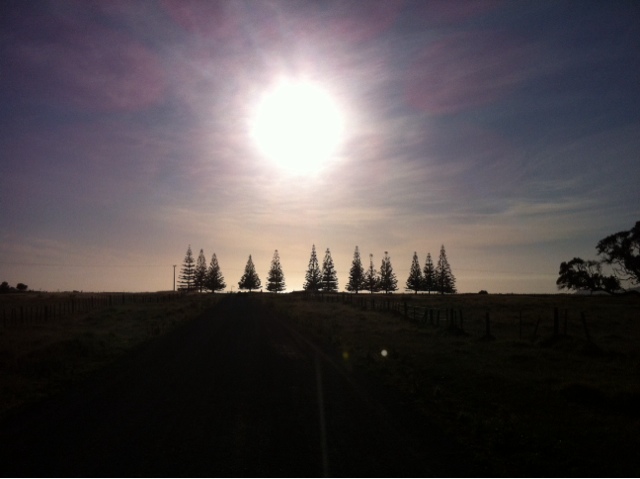 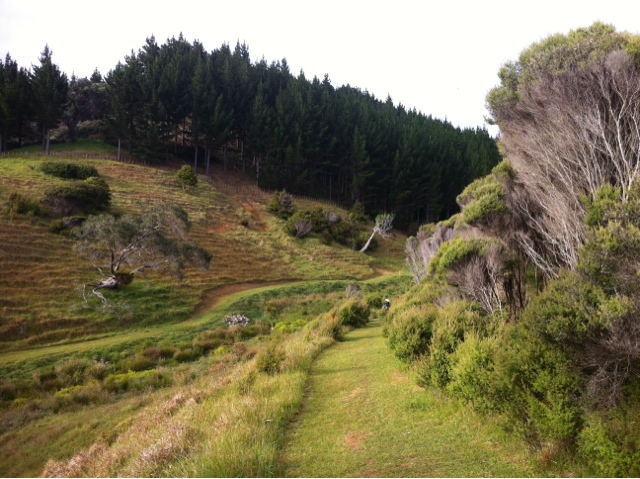 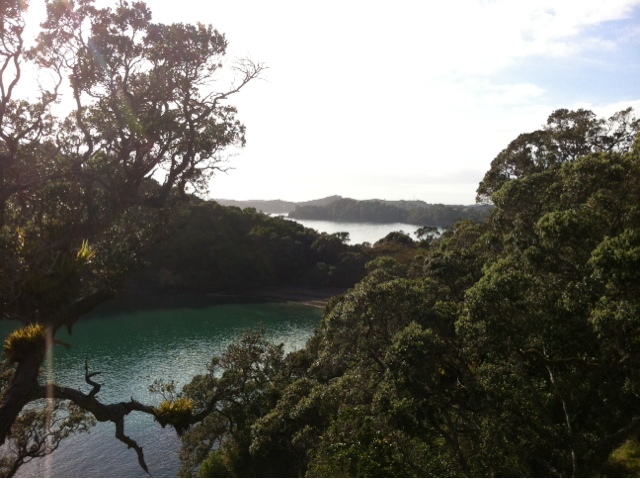 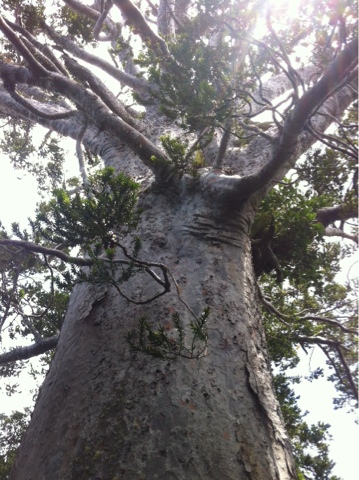